The SEC will begin taking a hard look at how the new Regulation Best Interest is informing the product recommendations that brokers make early next year — a significant step up from the implementation exams that will start as soon as the rule takes effect at the end of June, a senior SEC official said Friday.

In the interim, brokers and advisors can expect more clarifying guidance on how their firms will be expected to implement the various aspects of the rulemaking package, including publication of risk alerts on Reg BI and the Form CRS relationship summary “very soon” — likely later this month — according to Peter Driscoll, the director of the SEC’s Office of Compliance Inspections and Examinations.

“We’re really trying to get more information out to you all to help you do your jobs,” Driscoll said during a presentation at the Investment Adviser Association’s annual compliance conference.

The guidance on Reg BI and Form CRS will aim to give brokers and advisors a sense of how OCIE will approach examinations in those areas.

For Reg BI, the risk alert will include a sample of the documents the SEC is likely to request at the outset of an exam, Driscoll said. He expects the first Reg BI exams, looking at how firms have set up compliance programs around the rules, to begin in July, followed, on OCIE’s calendar, by more data-driven exams probing firms’ trading practices in winter 2021. 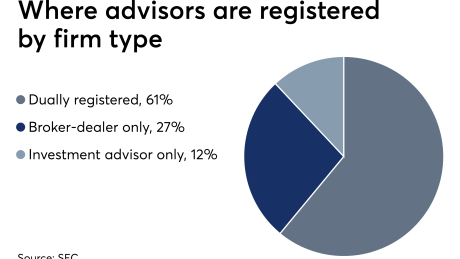 “By that time there will be a healthy-enough population of trading at firms to start ingesting that into our analytics tools that we have for trading,” Driscoll said.

Once the Reg BI package takes effect, those rules figure to play a major role in the SEC’s exams of brokers and advisors, even if resources at the division are limited.

Driscoll said that his team examined about 15% of all registered advisors last year, down from around 17% the year before, though he said much of that drop-off was attributable to the government shutdown.

OCIE has taken a number of steps to improve its coverage of the advisor space, including transferring exam staff from other units to focus on advisors and limiting the scope of many of its exams to focus on high-risk or less-understood areas of a practice and reach more firms.

But the government being the government, resources are not infinite, and Driscoll suggested that his office might be approaching its peak capacity.

“I don’t know how much more we can squeeze out of our program without sacrificing quality,” he said.

The situation is similar in the SEC’s enforcement division, where co-director Steven Peikin says his organization is still struggling to get its staffing back to the level it maintained prior to a hiring freeze four years ago.

“We’re climbing back, but we’re still meaningfully below the staffing levels that we were at in 2016,” Peikin said.